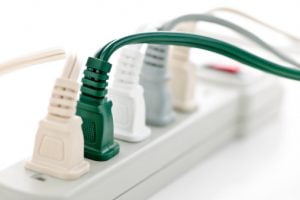 Power strips are a highly sought after commodity. Available everywhere from home improvement stores to your local drug store, power strips are thought by many people to be safe for everyday use. While a power strip can be an excellent source of additional electricity, most users don’t pay much attention to the warnings or the directions regarding use. For that reason, power strips are used for a lot of things they shouldn’t be–and it can cause big problems.

A power strip is any length of electrical sockets that are attached to the end of a long cable. The cable is plugged into an existing outlet, thereby providing a power source for one to six or more outlets at a time. Many people will actually plug two power strips into their walls, one for each available outlet. A problem can quickly arise when there are too many things seeking power at once. Many regular outlets, due to electrical standards, aren’t built to handle the amount of strain put on them by a power strip. This is especially true in older homes, which often lack the kind of permanent electricity required by today’s tech-savvy household.

While most people think “it could never happen to me,” the experts at Paul Davis regularly see the damage that results from overused outlets. Overloading, or the use of too much electricity from too small a source, can result in shock, electrocution, or even fire. You may think that by plugging only one or two things into your power strips you’ll avoid disaster, but that’s not necessarily the case. Many people plug in high-voltage items that are not intended for power strips–and even just one high-voltage item could spell problems.

During winter, one item that becomes quite popular to plug into a power strip is the space heater. That being said, heating equipment is the second leading cause of home fires in the United States. In fact, more than 65,000 home fires are attributed to heating equipment every single year, according to ESFi. We recommend that you never plug a space heater, even a small one, into a power strip, as power strips are not designed to handle the energy load of this appliance. Doing so can cause your power strip to overheat, creating a real fire hazard. Are you using a space heater this winter? Be sure to adhere to these important safety tips.

Here’s something very few people know about power strips. Although they’re designed to distribute electricity, they do not regulate power flow, block electrical spike, or block surges. While surge protection is incorporated into some power strips, it shouldn’t be assumed that this is automatic. Power strips, while convenient, should be used sparingly and temporarily with small, approved appliances and electronics. Never make an electrical strip a permanent wall fixture, especially in winter when electrical use is much higher.